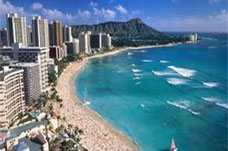 The capital of Hawaii, and the most populated community in the islands, is Honolulu. It can be found on Oahu’s southeast coast, between the areas of Makapuu and Halawa. The industrial and commercial areas are grouped tightly together on a narrow coastal plain. Most facts about Honolulu will tell you that the city is a popular tourist destination, particularly because it is the site of the state’s largest airport. The downtown area is especially popular, and is known as the financial,
commercial, and government center of the state.

The city of Honolulu is made up of many different areas, including places such as Manoa and Maikiki, Nuuanu and Pauoa, Palolo and Kaimuki, and Waikiki. Waikiki in particular is famous for being a tourist district and is located between the Ala Wai Canal and the Pacific Ocean.  Each year, the Waikiki Beach is visited by millions of tourists. Facts about Honolulu tend to point tourists to these locations because of the beautiful scenery and challenging water sports. West of this wonderful location is the Ala Moana Center, also known as the largest open-air shopping center in the world.