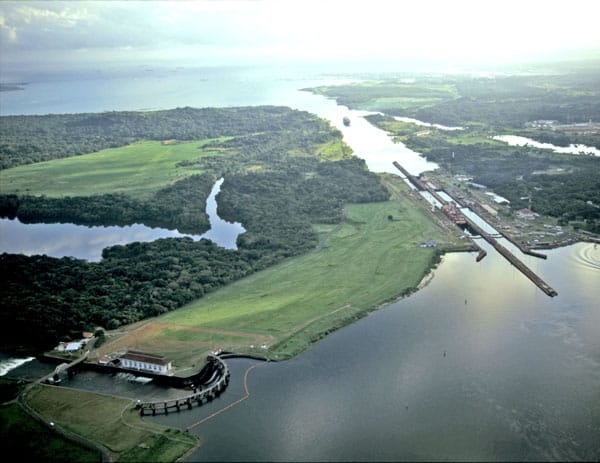 The 48 mile-long (77 km) international waterway known as the Panama Canal allows ships to pass between the Atlantic Ocean and Pacific Ocean, saving about 8000 miles (12,875 km) from a journey around the southern tip of South America, Cape Horn.What makes the Panama Canal remarkable is its self sufficiency. The dam at Gatun, is able to generate the electricity to run all the motors which operate the canal as well as the locomotives in charge of towing the ships through the canal. No force is required to adjust the water level between the locks except gravity. As the lock operates, the water simply flows into the locks from the lakes or flows out to the sea level channels. The canal also relies on the overabundant rainfall of the area to compensate for the loss of the 52 million gallons of fresh water consumed during each crossing. Despite the limit in ship size, the canal is still one of the most highly travelled waterways in the world, handling over 12,000 ships per year. The 51-mile crossing takes about nine hours to complete, an immense time saving when compared with rounding the tip of South America.