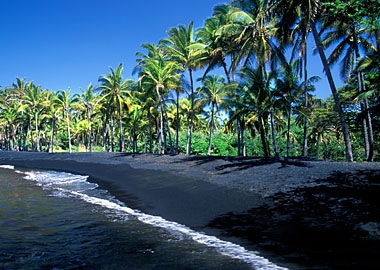 To avoid confusion with the name of the entire state, the Island of Hawaii is often called the “Big Island,” and what an appropriate name it is. Nearly twice as big as all of the other Hawaiian Islands combined, its sheer size can be inspiring. You’ll find all but two of the world’s climatic zones within this island’s shores. It’s easy to feel awed on Hawaii Island. From the molten magma flowing from Hawaii Volcanoes National Park to the snow-capped heights of Maunakea; from the green rainforests of the Hamakua Coast to the jet-black sands of Punaluu Beach; Hawaii Island is an unrivaled expression of the power of nature. On this island’s vast tableau, you’ll find everything from extravagant resorts and incredible golf courses to modest local towns and sacred Hawaiian historical sites, from the birthplace of King Kamehameha I to Hawaii’s first missionary church in Historic Kailua Village (Kailua-Kona).  With so much to see, it’s best to experience the island in small pieces. There’s plenty of room on Hawaii Island for your return.